Hyderabadis came out in huge numbers to watch KK (Krishnakumar Kunnath) perform at Rock Heights, Shilparaman on Saturday night. And the Bollywood singer did not disappoint as he entertained the audience with one of his most energetic concerts in recent times. He began with his hit songs Dil Ibadat from Tum Mile and Aankhon Mein Teri from Om Shanti Om, and upped the tempo with dancy numbers like the Tu Aashiqui Hai from Jhankaar Beats and Tu Hi Meri Shab Hai from Gangster, as the crowd sang along and danced away with glee to KK’s melodious voice. The 47-year-old, KK showed tremendous energy throughout the concert and was constantly pumping up the audience, who went numb with excitement as he belted out one hit after another. The crowd cheered when he sang Khuda Jaane, shed a tear with Tadap Tadap and transformed the venue into a dance floor when KK came up with Tune Maari Entriyaan.

The proceedings hit a crescendo when KK sang numbers like Koi Kahe, and Mujhko Pehchaanlo. He ended the evening with his evergreen classic song Pyaar Ke Pal, as the audience gave a thundering applause. By the time the concert was finished, KK had well and truly conquered the hearts of the Hyderabadis.

– Suhas.Yellapantula@timesgroup.com
Shared from the 2018-03-19 The Times Of India – Hyderabad Edition
Source Link 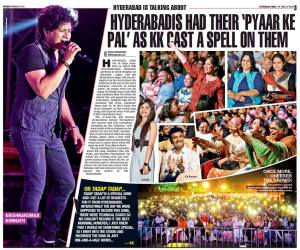 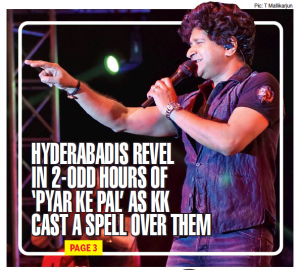