Close
Skip to content
Close
‘Music directors should start setting their own trend rather than following one.’
Interview by Sandra Marina Fernandes for TOI  |  April 21, 2018
When you speak to him about the Indi-pop scene in the 90s, singer KK gets nostalgic about a time when artistes had their own following without any Bollywood backup. Ahead of his performance in Bengaluru, KK talks to us about social media and its influence, Bollywood music and more. Excerpts…
How does it feel to be back in Bengaluru?
It feels great. I’ve been coming here since 1999 and it was one of the first cities where we launched my album Pal. Those days, it was very different, as there was barely any traffic and the weather used to be a lot cooler. The first time I came to Bengaluru, I thought I will come and settle down here. The population here is so vibrant and I’ve had a great spate of gigs here. I’ve performed at different venues in the city and it’s been an eclectic mix of people across all age groups. My cousin lives here and he takes me around Malleswaram early in morning for simple, authentic and wholesome food around the area. Each time I’m here, we try out a new eatery.
What do you think of the kind of music Bollywood is producing today?
A lot of it is rhythm and dance music, but there are some hidden gems even now that you get to hear occasionally. It’s not like it’s not there, but it’s more like a ‘demand and supply thing’. People want to hear music in a particular way and it’s a trend. I feel it’s time that music directors start setting their own trend rather than following one, because I feel there is so much talent in our country. There are so many music directors, who are new, young and talented. I feel there will be a turnaround, not just in Bollywood, but in the non-Bollywood space as well, which is growing slowly. There are so many new artistes on the other side of the fence.
You too were a huge part and a big hit in the 90s during the Indi-pop scene. What do you miss the most about that time?
I miss the freedom to create your own songs and music and having listeners who would support new artistes, who didn’t have a Bollywood backing. There was a time when even music channels were about music. There were so many bands performing across the country, having a good time. That time was great. I think somewhere down the line, people jumped the bandwagon wanting to make a splash and getting noticed. A lot of us, who did really well with our first albums, got sucked into Bollywood. It wasn’t a bad thing to do playback singing but my aim was to do my own album. But when I got into Bollywood, my mindset was different. I wanted to try different things in playback. The more I did it, the more I enjoyed it because I got to do great songs. Then I really enjoyed myself and thought that I will postpone my album, but I didn’t realize that my next album happened after nine years. You don’t realize the time because you enjoy the ride, it’s a great trip. But somewhere, I felt that the artiste in me suffered, not the vocalist, but the artiste and that’s what am trying to rediscover now. For 22 years I’ve done this, but now I want to get back to my zone.

Is that also the reason why you are doing fewer Bollywood numbers now?
Yes, that is one of the reasons. To rediscover yourself, you need to make a few changes in yourself. I need to take my time, rethink creatively. When you are working with someone else, you are working on a clean slate trying to recreate things. But when you work for yourself, it begins from the scratch.

You’ve sung in Kannada films earlier. Are there any more songs in the pipeline?

I’ve sung a few songs in Kannada, but I don’t know if it went down well with the people. I would love to do more Kannada songs and take up a nice project if it comes my way because I’m a sucker for great songs no matter which language it is in.

Social media has changed the dynamics in the field of music. Do you think that today’s generation has to compete a lot or is it easy for them to be noticed?

How do you explain this? In the music industry, there are so many people and they all have something to offer. A person won’t make a YouTube video unless they want to be laughed at, which is also sometimes popular these days. It’s different strokes for different folks, but if you are a musician at heart and want to do something in your life, you believe in yourself and follow a pattern and an approach. That approach today is a little more pronounced, it’s little clearer. In our times, we didn’t know and would think ab kya karen. I started off with jingles and did it for five years. But if it was now, I would’ve said ‘I want to make an album, I want to make my own song and put it out there’. But those five years of jingles honed my talent; it made me understand the value of time.

Your kids are into music as well. Tell us more…

Both my kids, Nakul and Tamara are learning music. They both are very avid musicians. They’re doing an online course in music, which is very exhaustive. I barely get to see my son sometimes. From my side, I don’t interfere much in their lives. I’m just a father figure, who helps them when they come to me. Because I believe that you need to give them their space. Let them make their own choices and learn from their mistakes. You can’t stop them from making mistakes. When I grew up, my father never interfered, I had a lot of freedom and he let me do what I wanted to and that’s what I’ve learnt from him. 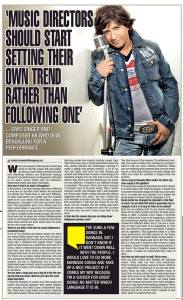